More about Amerikas Addiction based out of Milwaukee

Greetings ADDICTS and NON ADDICTS!
Today we have a VERY informative interview with someone who specializes in what many of you do…social media! If you are reading this interview right now, you are using a form of social media! You probably found out about his via social media aka facebook, linkedin, twitter and a whole host of others. I actually ‘met’ todays victim on the interview Angie Mack via twitter. I am fairly new to twitter myself and just like in the real world, first impressions count. My first impression on Angie was that she appeared genuine and a truly passionate person about what she does. Angie is very well versed in music (especially blues) and social media and how to network, conduct business, professionalism and a whole host of other things.

Trust me…after you read this, you will leave with something new to think about. Like I said before…Amerikas Addiction and what we stand for, is deeper than just making some music! It is about experiencing life and the people in our lives. We believe you must step outside of your box/circle if you want to truly change. I (J-The Truth) feel like I gained more knowledge just by asking Angie these questions and I feel compelled to share her insight into social media, the negativity certain people feel about rap/hip-hop music and the rich and forgotten history of blues music that has roots in (of all places) Grafton, Wisconsin.
So, grab a pen and some paper and learn something!

How did you get into social media as a profession?

I began as a volunteer in 2004 interacting with international audiences about a local record label from the early 1900s.  I became employed as Marketing Director in 2008 when a position opened up within my workplace.  I have recently started my own Social Media Services business called SocioFocus.

So, in regular people words…what do you do?

I am a Marketing Director and Performing Arts Instructor/Director for an arts school.  I’ve been in the music business my entire adult life both as a volunteer and as a paid professional.  Some people call me a music historian.  I just like to say that I have a big mouth.  I know a lot of people in the music industry.

How long have you been in the social media ‘Game’?

I have been working with social media since 2004.  My primary avenue back then was through forums, email and websites.

I also see you are into music! What do you do involving music?
Everything!  Seriously.  I’m a singer/songwriter, music historian, music director, recording engineer, on and on….But overall, I am a musical mentor.  I direct musicals, musical groups and give private piano, guitar, voice and songwriting lessons through the North Shore Academy of the Arts.  I recently helped a 13 year student of mine produce an original album of 10 songs.  I want to see others fulfill their musical dreams as well.

You told me about your involvement in blues music and trying to save and inform people on its rich culture! Could you explain more?

I lived in Grafton, WI for several years before I discovered that there was a recording studio in Grafton between 1929 to 1932.  Many of the recording artists who came here were the early African American delta blues musicians and singers from down south such as Charley Patton, Skip James, Son House, Tommy Johnson and more.  Paramount Records recorded early jazz, female vocalists, ethnic music, gospel music and more.  Back in the day, it was huge.  At the time, the Village of Grafton was not promoting or embracing the intense music history.  There was very little information about “Paramount Records” online.  So “Phase “1 in raising awareness was to create a website called http://paramountshome.org  “Phase 2”  was to begin talking about the historic record label with people around the world via social networking.  “Phase 3” was to create local events such as “Blues in the Schools” and an “Embrace the Legacy” concert series to prepare the community for an annual Blues Festival. There is now a Paramount Plaza “Walk of Fame” in Grafton with the above named artists etched in.  Other names such as Louis Armstrong, Ida Cox, Gertrude “Ma” Rainey and Joe “King” Oliver have also been inducted.  This makes me very happy. 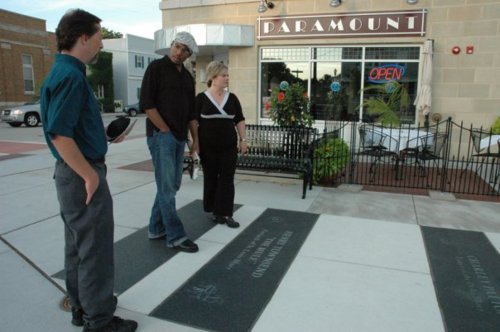 You wrote an article about hip-hop getting a bad ‘rap’. What inspired that article?

I am so sick of (primarily white) people saying that hip-hop isn’t a valid musical art form.  There seems to be a stigma that because it isn’t entirely acoustic it is somehow “lesser”.   I am also sick of (primarily white) people saying, “I like all kinds of music except for rap (aka hip hop).” I find that many of the attitudes toward hip hop are similar to early attitudes toward the blues.  I have honestly had people delete me from facebook because I have promoted hip hop on my wall.  Some have been offended by the lyrics or the content in the video.  You see, the blues was often referred to as “the devil’s music”.  I find that some circles believe this to be true about hip hop and rap.  It makes me very sad.  I blogged about it in an attempt to change public opinion.

What is the ‘secret’ to social media, in your opinion?

You have to be persistently passionate.  If you are, you will naturally create an online buzz and make key connections. Keep throwing those social “seeds” out there.  Keep talking to your online community.  Keep asking questions.  Your passion is bound to fall upon somebody who can help you further your cause.  Find a mentor and be a mentor.

What companies/personalities are doing ‘the right thing’ in regards to social media?

I recently blogged about @QdobaWI or Qdoba Mexican Grill-Wisconsin “doing it right”.  My place of employment (@nsaagrafton) was recently praised in Corporate Report Magazine for its social media marketing.  Three of my personal favorite personalities to follow are @sarandipity, @claytonjenks and @triveraguy who are all from SE Wisconsin.  I appreciate their genuine authenticity.  I also have to commend you (@jthetruth) and Amerikas Addiction for the followers and friends you’ve gained.  You are passionate about what you do and you respond favorably with your fans. The Musicians of Wisconsin facebook group has also done some pretty neat things.

What inspired you to become a teacher?

First of all, I would say that I am more of a mentor.  I like to help people in the process of going from A to B.  My faith in Jesus Christ is my number one inspiration to help others.  Second to that is my love for music.  I genuinely want to see others succeed in their musical dreams.  And I firmly believe that if are they willing to give to others, it will open doors of greater opportunities down the line.

Are there any events coming up in the future for you?

Yes!  Stay tuned for Open Mic nights @nsaagrafton featuring the Musicans of Wisconsin facebook group.  The next one will be 2/19 at 6pm.  We are also performing an adult/youth version of the musical HAIRSPRAY at Nicolet 4/29-5/1.

Any shout outs you want to give?

I would like to thank international blues musician/mentor Michael “Hawkeye” Herman and former Worship Pastor Tracy Martin for being two of my strongest mentors.  I would also like to commend the folks at the Grafton Blues Association for the fine work they do presenting an annual blues festival in Grafton as well as other blues related events.  I would like to thank African American playwright Kevin Ramsey for creating the musicals “Grafton City Blues” and “Chasin’ Dem Blues” about the Paramount record label.  I would like to thank my friend and Dutch author/researcher/historian Alex van der Tuuk, my Japanese blues research/musician friend Akira Kikuchi and my online friends throughout the world who have taken the time to converse with me.   I am very blessed to be able to work at NSAA and love all of my fellow coworkers.

And finally, we know you are a social media addicted person, where can we find you online?
You can find me on twitter as @twirlygirlmuse and @sociofocus.  You can “friend me” as “Angie K Mack” on facebook.  I currently manage content and social media for several websites including
http://sociofocus.com
http://northshoreacademyofthearts.org
http://storycreativeconnectionarts.com
http://paramountshome.org
I’m also on YouTube, LinkedIn, Foursquare and MySpace.

—
Amerikas Addiction would like to thank Angie for her time in doing this interview! We hope some of our followers and addicts and who ever is reading this, will do themselves a favor and contact you and learn more about what you do and who you are! Keep doing what you desire ANGIE!
– – –
www.amerikasaddiction.com

DO WHAT YOU DESIRE…

Angie is a Composer & Songwriter